A fire fighting system is probably the most important of the building services, as its aim is to protect human life and property, strictly in that order.

It consists of three basic parts:

A fire hydrant is a vertical steel pipe with an outlet, close to which two fire hoses are stored (A fire hydrant is called a standpipe in America). During a fire, firefighters will go to the outlet, break open the hoses, attach one to the outlet, and manually open it so that water rushes out of the nozzle of the hose. The quantity and speed of the water is so great that it can knock over the firefighter holding the hose if he is not standing in the correct way.  As soon as the fire fighter opens the hydrant, water will gush out, and sensors will detect a drop in pressure in the system. This drop in pressure will trigger the fire pumps to turn on and start pumping water at a tremendous flowrate.

A sprinkler is a nozzle attached to a network of pipes, and installed just below the ceiling of a room. Every sprinkler has a small glass bulb with a liquid in it. This bulb normally blocks the flow of water. In a fire, the liquid in the bulb will become hot. It will then expand, and shatter the glass bulb, removing the obstacle and causing water to spray from the sprinkler. The main difference between a hydrant and a sprinkler is that a sprinkler will come on automatically in a fire. A fire hydrant has to be operated manually by trained firefighters - it cannot be operated by laymen. A sprinkler will usually be activated very quickly in a fire - possibly before the fire station has been informed of the fire - and therefore is very effective at putting out a fire in the early stages, before it grows into a large fire.  For this reason, a sprinkler system is considered very good at putting out fires before they spread and become unmanageable.  According to the NFPA of America, hotels with sprinklers suffered 78% less property damage from fire than hotels without in a study in the mid-1980s. 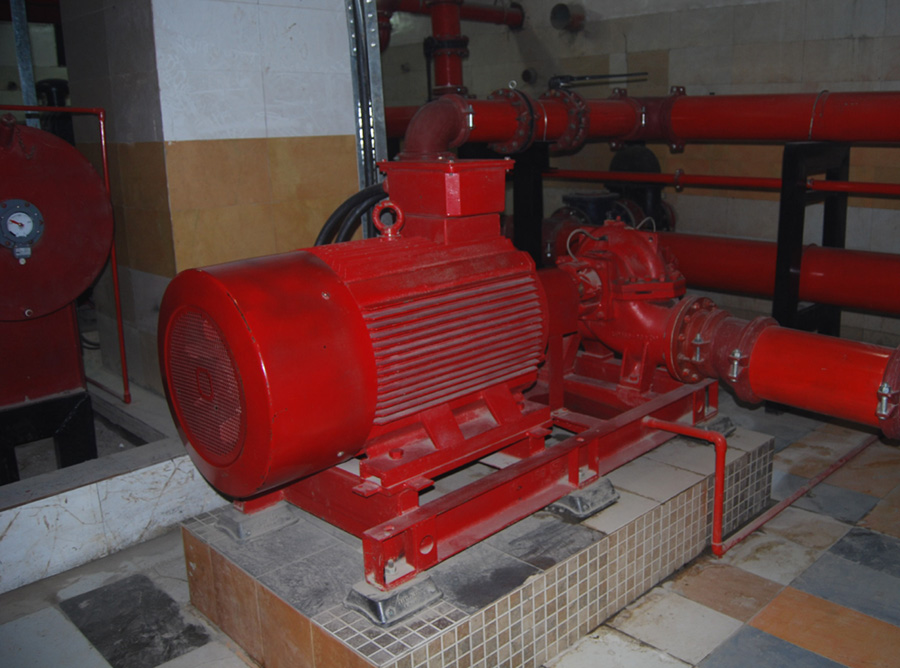 The amount of water in the fire storage tanks is determined by the hazard level of the project under consideration.  Most building codes have at least three levels, namely, Light Hazard (such as schools, residential buildings and offices), Ordinary Hazard (such as most factories and warehouses), and High Hazard (places which store or use flammable materials like foam factories, aircraft hangars, paint factories, fireworks factories).   The relevant building code lists which type of structure falls in each category.  The quantity of water to be stored is usually given in hours of pumping capacity. In system with a capacity of one hour, the tanks are made large enough to supply the fire with water for a period of one hour when the fire pumps are switched on.  For example, building codes may require light hazard systems to have one hour’s capacity and high hazard 3 or 4 hours capacity.

The water is usually stored in concrete underground tanks. It is essential to ensure that this store of water always remains full, so it must have no outlets apart from the ones that lead to the fire pumps. These tanks are separate from the tanks used to supply water to occupants, which are usually called domestic water tanks. Designers will also try and ensure that the water in the fire tanks does not get stagnant and develop algae, which could clog the pipes and pumps, rendering the system useless in a fire.

Fire pumps are usually housed in a pump room very close to the fire tanks. The key thing is that the pumps should be located at a level just below the bottom of the fire tank, so that all the water in the tanks can flow into the pumps by gravity.

There is also a fourth type of pump called a jockey pump. This is a small pump attached to the system that continually switches on to maintain the correct pressure in the distribution systems, which is normally 7 Kg/cm2 or 100 psi. If there is a small leakage somewhere in the system, the jockey pump will switch on to compensate for it. Each jockey pump will also have a backup.

The pumps are controlled by pressure sensors. When a fire fighter opens a hydrant, or when a sprinkler comes on, water gushes out of the system and the pressure drops. The pressure sensors will detect this drop and switch the fire pumps on. But the only way to switch off a fire pump is for a fire fighter to do this manually in the pump room. This is an international code of practice that is designed to avoid the pumps switching off due to any malfunction in the control system.

The capacity of the pumps is decided by considering a number of factors, some of which are:

The distribution system consists of steel or galvanised steel pipes that are painted red.  These can be welded together to make secure joints, or attached with special clamps.  When running underground, they are wrapped with a special coating that prevents corrosion and protects the pipe.

There are basically two types of distribution systems

Automatic Wet systems are networks of pipes filled with water connected to the pumps and storage tanks, as described so far.

Automatic Dry systems are networks of pipes filled with pressurized air instead of water. When a fire fighter opens a hydrant, the pressurized air will first rush out. The pressure sensors in the pump room will detect a drop in pressure, and start the water pumps, which will pump water to the system, reaching the hydrant that the fire fighter is holding after a gap of some seconds. This is done wherever there is a risk of the fire pipes freezing if filled with water, which would make them useless in a fire.

In high-rise buildings it is mandatory that each staircase have a wet riser, a vertical fire fighting pipe with a hydrant at every floor.  It is important that the distribution system be designed with a ring main, a primary loop that is connected to the pumps so that there are two routes for water to flow in case one side gets blocked.

In more complex and dangerous installations, high and medium velocity water-spray systems and foam systems (for hazardous chemicals) are used.  The foam acts like an insulating blanket over the top of a burning liquid, cutting off its oxygen.  Special areas such as server rooms, the contents of which would be damaged by water, usegas suppression systems.  In these an inert gas is pumped into the room to cut off the oxygen supply of the fire.

When you design a fire fighting system, remember the following: