Like robotic construction, 3D printed buildings have been getting a significant amount of press coverage. Has this technology come of age? Read on to find out.

Lets start by studying some examples of 3D printed buildings. As of mid 2017, the leader in the field (by number of buildings built) is Chinese company Winsun. Winsun's founder, inventor Yihe Ma has developed a technology based on a large 3D printer it states is 10m wide, 6.6m high, and can make very long components, as a conveyor belt can be used as the 3rd axis. The technology is similar to the paste extrusion technology found on consumer desktop 3D printers.

​The machine consists of a head that moves in 3 dimensions, and extrudes a paste-like material (like continuously squeezing a tube of toothpaste to form a line across your bathroom countertop). The extrusion is done in horizontal layers, one above the other. The paste then hardens to form a rigid structure in a matter of hours. When you add up all the layers, you can build an object of any shape.

To make a shape, the machine will start with the data file describing the 3D geometry of the part, most often in stl format. The software will then "slice" the shape into a large number of horizontal layers. The machine will then build the part, starting with the lowermost layer, and adding layers sequentially one above the other till the top of the part is reached. Most 3D printers work in this fashion.

In the case of Winsun, the material used seems to be a paste of cement, sand, and fibers (for tensile strength) mixed with water and chemical additives to give it the right mix of flowability and rapid setting properties. Winsun does not share detailed pictures of the machine, so it is likely that this mixture is prepared in conventional concrete mixers and then pumped into the machine through a flexible pipe. They also claim to use industrial waste in the mix. The mixture needs to set rapidly, as if it is still wet and fluid when the upper layers are added, the lower layers will squeeze and deform under their weight. This material is sometimes called the "printing ink" in the press, but we prefer the term "construction material".

The walls are about 9" thick, and are made of an inner and outer layer of material, connected by zigzagging planes of material.  This a very clever bit of engineering that works exceedingly well with the 3D printing process. In this way, Winsun is able to build walls in any shape. Some images:
A key aspect of the method is that the 3D printing is done in a factory, not at the site. This differentiates Winsun's approach from other organisations. It is similar to the method of precast concrete construction, where factory-made components are transported to the site, lifted into place by cranes, and then connected together.

Lets look at the first set of 3D printed buildings made by Windsun:
So in this case, Windsun has used factory 3D printing to create the wall panels, and then transported them to site, assembled them together, and finished off the rest of the construction - roof, floor finishes, doors, windows, electrical system - using conventional methods.

Windsun released this to the press claiming "3D Printers print 10 houses in 24 hours", but we take that statement with a pinch of salt, because what we are interested in is the total construction time.

Lets now look at the next building constructed by Winsun.
This is a five-storey apartment building in Suzhou Industrial Park in China. While this is very impressive, let us conduct a quick forensic analysis of the building to see how this has been done.

The following photos give us clues:
The photos indicate that some, but not all of the building components are 3D printed. One can make out the 3D printed components by the numerous closely-spaced horizontal striations or layers on the surface. Roughly 1" high, these layers indicate that the walls have been 3D printed, while most of the other components are conventional. Winsun's main business is glass and fiber reinforced concrete components, and these most likely are the red and white cladding elements that cover the 3D printed walls. See the table below for a more detailed analysis. 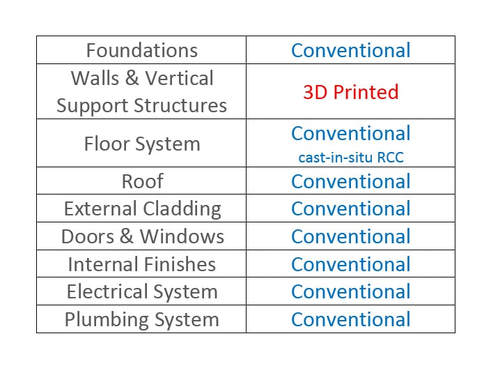 Disclaimer: this analysis is comprised of guesswork based on the limited information in the public domain. It is not intended as a statement of fact.

We have performed this analysis because every press article on the project we have seen assumes that the entire building has been 3D printed in all respects.

What this tells us is that the technology is still in its infancy, and needs many years of development before it can become a working alternative to conventional construction. Buildings have to be hurricane and earthquake-resistant. They need to be sufficiently resistant to fire to allow occupants time to evacuate the building.

Having said that, one must appreciate Winsun's technology. They have been innovative enough to develop both the concrete mix and the machine to print large-scale building components that can be prefabricated and shipped to site. They are the world's first company to do so. They have done all this in China, and no doubt have bigger plans for the future.
​

Another interesting company in the field is Contour Crafting, a company founded by Dr. Berokh Khoshnevis, based on work he has done at University of Southern California Schools. We were fortunate enough to meet Dr. Khoshnevis at a 3D printing conference and discuss his technologies at some length.

Dr. Khoshnevis, a roboticist, has developed a range of interesting technologies that have applications in building construction. Some of them are:
Contour Crafting is now working on a system to 3D print houses. In their approach, the machine is placed on the site, and is bigger than the actual house. It is mounted on a gantry crane system, and will use a range of robots to build all the house systems, including electrical and plumbing systems.

Some sample walls built by contour crafting machines are shown below.

Our conclusions are that 3D printed buildings are a long way off from realisation.

Current problems include:
So while this technology is certain to prevail in the long run, in the short run, buildings will still be built primarily by humans...
3D Printed Building Construction