Fasteners are called anchor fasteners in the building trade. This is because in most cases, they connect something to a base material such as concrete or brick, like the anchor of a ship embeds itself in the sea bed and does not allow the ship to move.

HILTI Mechanical Anchor Fastener. The blue mark indicates the minimum depth to which the anchor should be installed.
Mechanical anchor fasteners use friction to anchor themselves in place. The most common type of anchor is designed to expand in diameter when it is pushed into the hole. This expansion grips the base material tightly and causes the anchor to be firmly wedged in place.

This is similar to the way wall plugs (also called rawl plugs or dowels) are used when screwing things into a wall. A hole is first drilled and the wall plug inserted. The wall plug is a small piece of plastic or wood, or any material that is slightly flexible and compressible. A screw is then inserted with force, which causes the wall plug to be pushed against the base material as it is forced into the narrow gap between the screw and the wall. This pushing force is what anchors the screw in place and keeps it from falling out.

In mechanical anchor fasteners, the diameter of the hole that is drilled is critical. It must be just right. If it is too large, the anchor may not grip the sides of the hole sufficiently, and may fail when subjected to loading.

HILTI new-generation Chemical Anchor Fastener. The chemical sets around the grooves in the anchor, firmly holding it in place.
In chemical anchor fasteners, a special adhesive is used to stick the anchor into the hole. First, a hole that is usually about 4mm larger than the bolt is drilled. Care must be taken to remove all dust and debris from the hole. It is then filled with the chemical adhesive. The bolt is then inserted. The adhesive should completely fill the gap between anchor and hole, and should spill out of the hole when the bolt is inserted.

The chemical will then set - quick setting chemicals may set in an hour, while the more common ones may take 24 hours - and only after it is set may one apply load on the anchor.

The chemical (technically called an epoxy resin) is sold as a two-component pack. Both components are inserted into the muzzle of an application gun. The workperson squeezes the trigger, which pushes both components into a long plastic nozzle that also mixes the two together, before the mixed resin comes out of the tip of the nozzle. 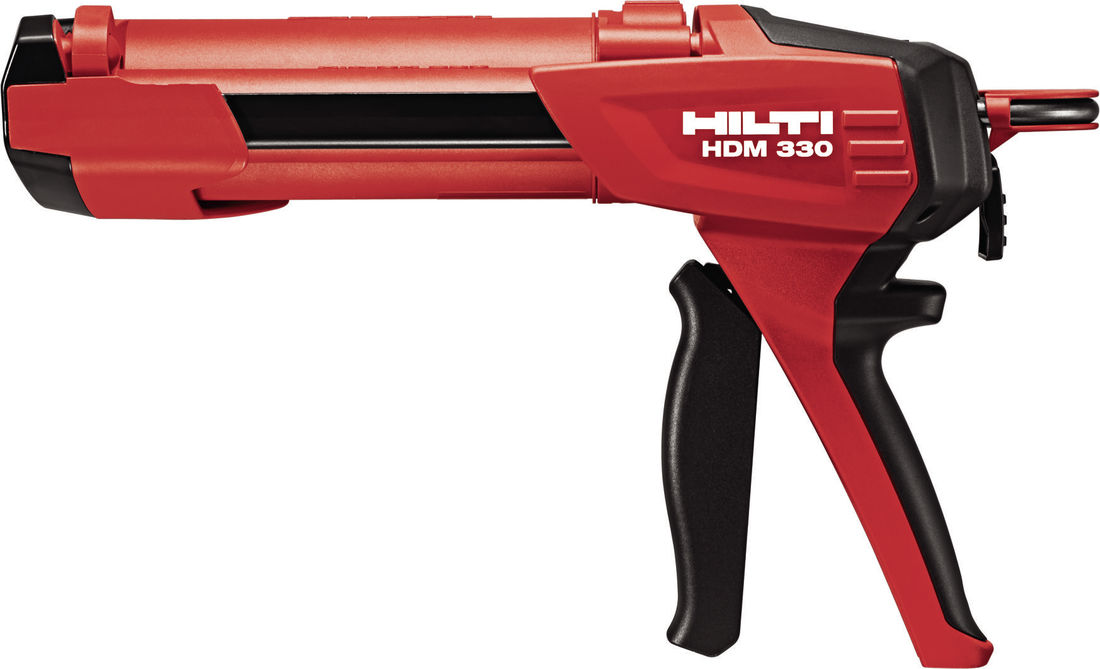 HILTI manually operated resin gun; squeezing the trigger pushes the two components through a nozzle, which mixes them together and pushes out the mixed resin out of the tip.

HILTI two-component chemical adhesive for fasteners. The chemicals are pushed through an injection gun, which mixes them thoroughly before injecting into the hole.

mechanical vs. chemical anchor fasteners -
which should you choose?

While type of anchor fastener has its own characteristics, the key differences between chemical and mechanical fasteners are listed below: